A Ravine Restoration from a Birds Eye View 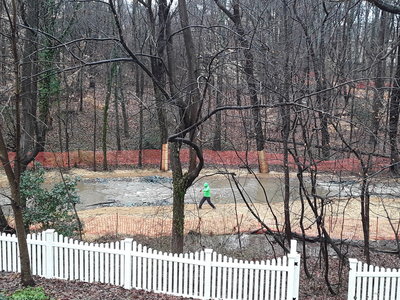 Greg and I fell in love with our house on Van Buren Drive the minute we saw it in March 2017. There were many things to like, but one of the biggest selling points for us was that the house backed to City-owned open space along the headwaters of Hawkins Cove. Greg is a Watershed Steward and we’re both very interested in native landscapes. When we found out the Spa Creek Conservancy was moving forward with a restoration project we were beyond ecstatic.

We had front row seats to observe the project. Watching construction in a stream bed is challenging because it seems so catastrophic when it is happening. There was a lot of heavy equipment, tree clearing, and grading. I had to remind myself that stream restoration projects mature into beautiful and functional landscapes that control erosion, reduce sedimentation, and provide great habitat for a wealth of species including amphibians, reptiles, birds, and mammals. Amy Clements lauded Meadville Land Service and their experience doing these types of projects. She was right, they were amazing. Meadville was finished with the project in about three weeks time. The limits of disturbance for the project were slender, maybe 50 feet wide. Trees near the LOD were protected with wooden boards and giant wooden pallets were laid across the ground for the heavy equipment to travel along during construction. Meadville kept within the LOD even though they were using large backhoes and dump trucks. They started at the furthest point upstream and then worked their way to the mouth of the creek. The result is a wider stream that has riffles made from rip rap and cobble spaced along the entire stream length.

Almost immediately after construction was completed, we had the five-inch rain event February 10-11, 2018. The water was so high that only the outer edges of the rock riffles were visible. There was so much water that the stream formed rapids as it ran across the riffles. The water sounded like a fast running mountain stream. We watched all day Sunday hoping everything would hold in place. Thankfully it did.

In March native trees and shrubs were planted along the project. The resident red-shouldered hawk pair seem happy. We’ve also spied a bald eagle overhead as well pileated woodpeckers. Pileateds require large forested areas so observing them in this swath of forest was a surprise. We can’t wait to see the project mature over time and witness the new critters that will call the Hawkins Cove stream valley their home.