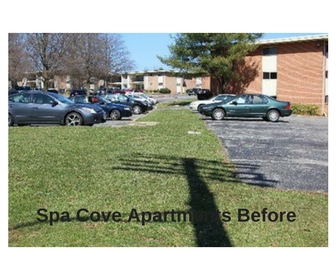 Runoff treated at its source is an effective and efficient way of controlling erosion and slowing stormwater runoff before it empties into Spa Creek.  In our assessment of the Hawkins Cove watershed, we found that much of the runoff silting in the ravine was coming from the Spa Cove Apartments, built on top of the slope overlooking the Cove.

Spa Creek Conservancy and volunteers along with residents of Spa Cove Apartments recently installed a bioretention cell in a parking lot median strip. The bioretention cell will cover storm water runoff from over an acre of drainage, mostly from impervious parking, roadway areas and rooftops. 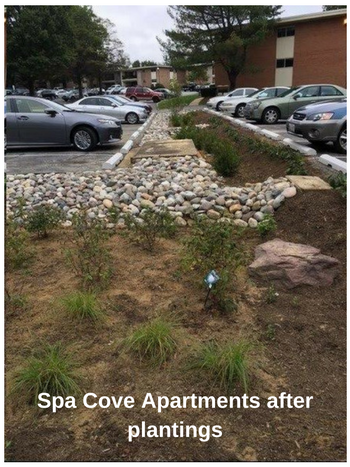 The community was actively involved in the planning and execution of this project from early design stages to construction of the device. Residents and volunteers from the community planted the garden which included 2 canopy trees, 24 shrubs and over 200 perennials and grasses.

On a barren and eroded area behind two of the Spa Cove apartment buildings, an eroded hillside was stabilized and covered with conservation planting. This area had many problems, including compacted and clay soil, lack of grass cover, shade from the adjacent forests, and erosion along the bank leading to the street.

The conservation planting covered 8,000 square feet of area and created a forested oasis behind the apartment buildings. The ground was tilled and leaf gro added to provide nutrients to the soil and allow infiltration into the soil. All downspouts were directed into the middle of the area through river rock reservoirs which slow and direct water into the soil.

The eroded bank was rebuilt with two step pools that cascade down the slope to stabilize this area and provide adequate drainage.  Residents and volunteers helped plant 15 trees, 79 shrubs and 290 perennials and grasses within the area which will expand the adjacent forest, provide ample opportunities for wildlife and provide an attractive rear yard for each resident.