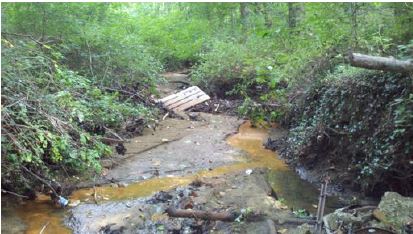 A $1.4 million grant has been awarded to Spa Creek Conservancy for restoring the ravine at Hawkins Cove on Spa Creek in Annapolis.

Maryland Governor Larry Hogan announced on June 15, 2016 that the Department of Natural Resources has awarded grant funding, totaling $23.25 million, to reduce nonpoint source pollution through the Chesapeake and Atlantic Coastal Bays Trust Fund. The Trust Fund directs funding to the most cost-effective and efficient projects in the state, with the goal of gaining the greatest reduction of pollution for the investment being made.

The Spa Creek Conservancy (SCC) grant will be used for a critical part on a multidimensional program to salvage an entire small-watershed (10 to 40 ha) that has destroyed a once viable water body – Hawkins Cove. This grant will be used to restore the heavily silting stormwater sourced eroding ravine, streambed, and flood plain, that contributes to the silt overload which is killing the cove. Upland sourcing will also be dealt with by installing stormwater best management practices (SWBMP) to reduce the polluted runoff. Once much of the runoff is reduced and mitigated the waterfront marsh area will be restored in a later phase.

“The Trust Fund is one of the most innovative pollution reduction programs in the nation,” Natural Resources Secretary Mark Belton said. “It engages local communities and leverages third-party organizations and partners into real, practical projects and solutions. Through this program, the state is effectively lowering the costs to reduce pollution in our waterways, a victory for the environment, taxpayers and the watershed.”

The project will begin once all necessary permits have been received.