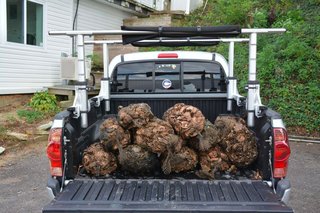 On October 24, nine Spa Creek Conservancy volunteers spent four hours cleaning and planting the largest oyster garden in the Spa Creek watershed. In the fall of 2015 Kevin Haigis, owner of Capital SUP, organized the garden at the South Annapolis Yacht Centre (SAYC) dock, which is now home to 50 oyster cages.

Oysters play a critical role in the bay’s recovery given their unique filtering capabilities and habitat they provide for many marine species. Each cage filled with young oysters, called spat, will collectively filter up to 50 gallons of water per hour. These cages become miniature living oyster reefs home to mud crabs, minnows, grass shrimp, and baby eels. 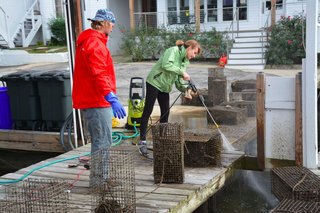 What was once a thriving maritime marina formerly known as the Sarles and Petrini Shipyards, has degraded into a rusty, neglected, and environmentally hazardous area. Redevelopment plans are in the works, but currently the boatyard is falling apart and is not only unsightly but presents both dangerous and harmful conditions from unfiltered runoff into Spa Creek and the Chesapeake Bay.

With any 1-inch rain fall 55,000 gallons of rainwater rushes directly from the property into the water ultimately ending up in the Chesapeake Bay. These oysters help to filter and reduce some of the runoff into the Bay.

Bags of spat on shell were collected from the Oyster Recovery Partnership and the Marylanders Grow Oysters program of the Severn River Association. The oyster spat were split up among the cages and then suspended into the water column to grow into mature oysters which will be relocated onto a sanctuary reef to one day rebuild the decimated oyster population which are now at only 1% of its historic numbers in the Chesapeake Bay.

The cages require cleaning once a month to rid them of sediment and suffocating algae buildup. Baby oysters need adequate water flow which is full of nutrients needed to survive into adulthood.