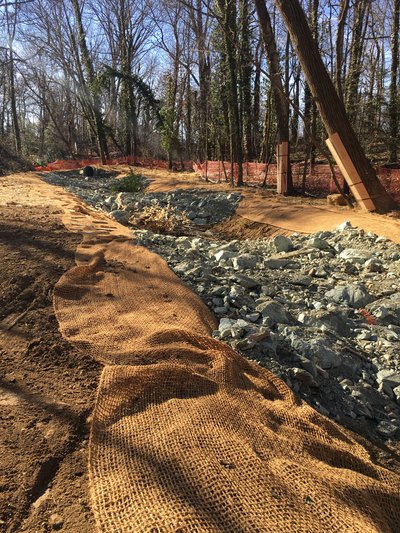 Construction for the Hawkins Cove Ravine Restoration Project in Annapolis, commenced in early January 2018. The crew began by clearing brush and trees from the area the ravine travels through, and laid down pallets in order to prevent equipment from sinking into the mud. During this process, decisions were made regarding which trees to preserve or take down. The trees situated closest to the construction area are protected with wooden boards tied around the trunks.

During the second week of work, the creation of riffles, rocky patches in the ravine that work to slow down water, prevent sediment flow, and create pools of water, was underway.

Contractors also began constructing rows of riffles at the mouths of two storm water pipes. So far, they have five riffles up at one storm water pipe, and three up at the other. Their goal is to have four more riffles added to each pathway in order to reach the tributary where the two meet by the end of the week.

These images show the area that has been completely filled in with silt from the storm water. The dock is currently useless, as the waters have become completely impassable.

This image shows the cleared pathway with pallets laid down and boards protecting the preserved trees.

There was concern that the water in the ravine was being contaminated with oil from the construction equipment, so the water was tested. The results came back negative for oil. Instead, it was found that the waters are naturally very acidic, which gives it this filmy appearance.

This image gives a perspective looking up at the five riffles, with the storm water pipe oriented at the top of the hill.

This image gives a view of the other three riffles. In this image you can see the storm water drain that empties into the ravine.